Two shots here, separated by about six months. A fascination with corrugated iron is the most obvious visual connection, but there are aspects of an aesthetic which some might identify as grunge – although I am not really a fan of Pearl Jam, Nirvana, or other grunge bands. Look at the work of New Zealand sculptor, Jeff Thomson, and you might get some insight into the fascination.

There are nīkau palms in a number of locations around Wellington city – as well as the iconic sculptural versions which feature in and around Civic Square.

The fallen nīkau frond shown here is from one of the palms in a paved area on the corner of Victoria and Manners Streets.

This magnificent blue iceberg was shot from a ship off the South Sandwich Islands in Antarctica. It’s a cathedral of ancient ice, with a little group of Adélie penguins and a prion perfectly positioned overhead. To catch the moment and frame it perfectly reveals skill, in this case, of a photographer in love with ice: photo by Cherry Alexander, 1995, from 50 Years of Wildlife Photographer of the Year: How Wildlife Photography Became Art, edited by Rosamund Kidman Cox (Natural History Museum, 2014) via The Guardian, 17 September 2014 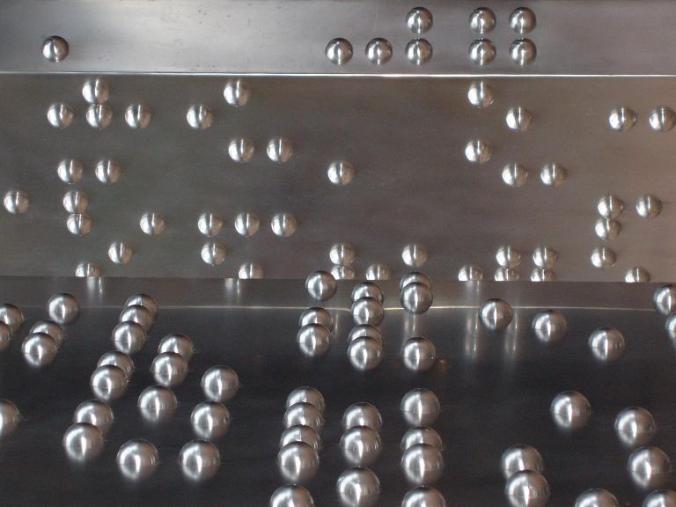 “Things are not what they appear to be: nor are they otherwise.” (The Surangama Sutra)

The image is a detail of “Invisible City”, created in 2003 by Anton Parsons, and located on Lambton Quay, Wellington, at the intersection with Grey Street. But I have reoriented and cropped my image to emphasise the illusion of steel balls falling.

The Wellington Sculptures web-site notes that “The stainless steel of this sculpture seems to glow with an inner light. The magnified Braille text suggests a message, but the artist chooses to deny us access, raising issues of communication in the contemporary world, and the difficult interface between the disabled and the rest of the community.”

Anton Parsons explains: “Invisible City is an appropriate public work because it functions on several levels: Aesthetics – even without understanding that the dots on the two boxes are braille text, Invisible City is an aesthetically pleasing object – it doesn’t have to be read to be appreciated. Tactile – it is made to be touched. Surface – Invisible City is polished stainless steel, and reflects its surroundings. When looking at it you see a reflection of Wellington.” 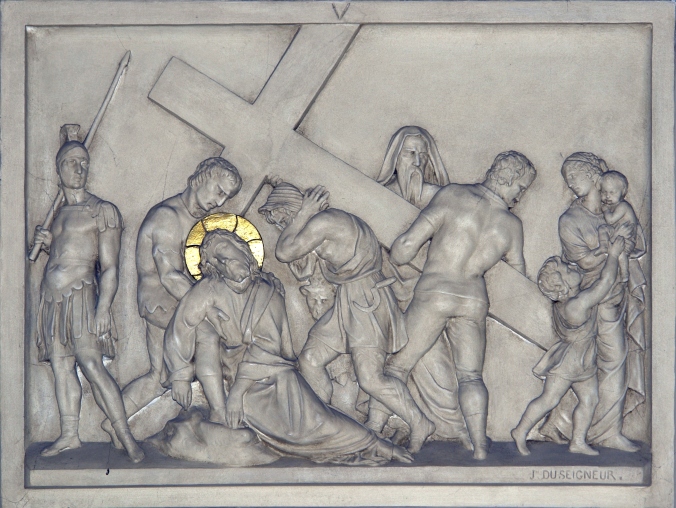 Stations of the Cross #5, “Simon of Cyrene carries the cross”, Notre-Dame Basilica, Geneva.

On Good Friday I sat in church, watching and listening as most of the congregation followed the priest around the fourteen Stations of the Cross. The woman with the walking-frame, stoically devout, completed the circuit with the others, while her white-muzzled black dog hobbled back and forth up and down the nave, stopping to receive attention from some of those who, like me, had remained in their pews.

Meditations translated from the words of French poet Paul Claudel were spoken gently by a man known for his work as a broadcaster. Between the meditations, periods of silence were terminated by spells of difficult and discordant organ music – some strident, some morose – which I could have done without.

I had earlier told the woman who had welcomed me that my parents had been married in this church, and that I had been baptized here.

I will return to St Peter’s on Willis on Easter Day, looking forward to the Eucharistic ritual I have not shared in since Midnight Mass at Wellington Cathedral on Christmas Eve.

The tradition of moving around the Stations to commemorate the Passion of Christ began with St. Francis of Assisi and extended throughout the Roman Catholic Church in the medieval period. It is also observed in Lutheranism and Anglo-Catholicism. It is most commonly done during Lent, especially on Good Friday (from Wikipedia: Stations of the Cross).

Wikimedia Commons includes a page with links to images of twelve of the fourteen Stations of the Cross by sculptor Jean-Bernard Duseigneur. (This page gives his name as Jean-Baptiste Du Seigneur, and he is elsewhere known as Jehan Duseigneur; eg, on Paris Sculptures.) Born in Paris in 1808, Duseigneur studied at the École des Beaux-Arts, and in 1831 achieved renown when he exhibited Roland Furieux, often regarded as the first romantic sculpture (now in the Louvre). Soon afterwards he turned almost exclusively to the production of religious works (adapted from a brief article in Wikipedia).

PS – Easter Day: The old black dog, Emma, was there again today; she, like the other “regulars”, was wearing her name-tag.

Nothing of my past
(or virtually nothing)
seems suitable now;
not quite inappropriate
– merely ineffectual.

This morning I snapped
the connection between now
and my history.
Don’t ask me who I am; time
starts now … and again starts now.

Written yesterday, the tanka serves as a marker: I am starting again … again.

The image, shot in 2009 but not selected for display, now appeals to me afresh.

‘This feels really pure, a blessing, baptismal even.’ (Elizabeth Thomson)

In May 2011, a group of artists from the South Pacific region travelled on HMNZS Otago to a place rarely explored – the sea and islands of the Kermadecs.

The Kermadecs are the most remote part of New Zealand. Despite their natural and historical significance, our awareness of the islands and surrounding waters is slight.

The Kermadec Artists Voyage provided some of our finest communicators an opportunity to document a unique encounter with one of the greatest, least known, pristine ocean sites on the planet. (from Kermadec: Nine artists in the South Pacific)

In conversation with Ruth Harvey for Art New Zealand, Elizabeth Thomson talked about the work pictured here, explaining why she strives for photographic realism (ie, why she doesn’t want the brush-strokes to show):

I don’t want to get in the way of how the work is read. It’s not about me, it’s about the concept. If my hand was visible the work would have less dimension.

KERMADEC – Nine Artists in the South Pacific opened on 04 October at the City Gallery Wellington, and runs until 10 February 2013. For further details, go to http://www.thekermadecs.org/wakey-wakey-wakey

ELIZABETH THOMSON (born in Auckland, 1955) is a sculptor/installation artist, whose work often engages imaginatively with the Pacific region. In her early twenties, she lived on Christmas Island for six months and her experiences from that time continue to shape her artistic life. Thomson’s work also has strong connections with biology, physics and other areas of science. A major survey of her work, ‘Elizabeth Thomson—My Hi Fi my Sci Fi’ toured the country in 2006-7. She is represented by Mark Hutchins Gallery, Wellington; Two Rooms, Auckland; Nadene Milne Gallery, Arrowtown and RH-Art, Upper Moutere. (from a website called The Kermadecs.

The image of the artwork: Elizabeth Thomson, Sunday Island (2011), bronze, zinc, oil pigment, lacquer, hand-formed glass, acrylic on wood disc. One of the works in ‘Kermadec’ which runs at City Gallery, Wellington from 04 October 2012 until 10 February 2013.

Swiss artist Thomas Hirschhorn’s installation at the Venice Art Biennale 2011 is called Crystal of Resistance. (The DesignBoom website has a big feature on it, with lots of photos. Mind you, the installation itself seems vast and sprawling.)

The September 2011 edition of ArtForum, covers the work, in a feature called “Truth or Dare : David Joselit on the art of witnessing“. (David Joselit is Carnegie Professor of the History of Art at Yale University.)

Professor Joselit explains that Thomas Hirschhorn wanted “to give a form which resists facts, which resists opinion and which goes beyond actuality, which reaches beyond information — that is why I invented the motif ‘eye and its capacity to see everything red. … The eye doesn’t need to know — the eye just sees and that’s what counts.”

The author concludes that “if art is ever to become genuinely political again, it will have to do so through a politics of witnessing. And this presumes the vivid, visceral assertion (at which Hirschhorn excels) that looking itself is not innocent — it is a commitment, a contract, an embarrassment, an accusation, a turn-on, and an assault, but never just a simple act of consumption.”

Haiku — “a concentrated, perfectly balanced flashpoint of recognition and insight.”

__________
I read this ‘definition’ of haiku in a review of a current exhibition that includes the work of Bianca Maria Barmen (a sculptor). The exhibition, in Kunsthallen Brandts, Odense, Denmark, runs to 7 August. The review appears on pp13-14 in the June 2011 edition of Sculpture magazine.