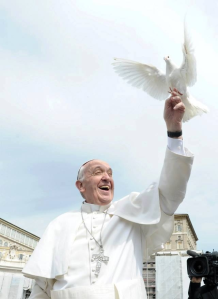 “Doing good” is a principle that unites all humanity, beyond the diversity of ideologies and religions, and creates the “culture of encounter” that is the foundation of peace: this is what Pope Francis said at Mass this morning at the Domus Santae Martae …” (Vatican Radio, 22 May 2013)

“In a message delivered Wednesday via Vatican Radio, the new pontiff distinguished himself with a call for tolerance and a message of support – and even admiration – toward nonbelievers.” (Salon, 24 May 2013)

The pope spoke of the need to meet each other somewhere on our on common ground. “Pope Francis … stated that it doesn’t matter if people are non-believers as long as ‘we do good to others, if we meet there, doing good, and we go slowly, gently, little by little, we will make that culture of encounter: we need that so much. We must meet one another doing good.'” (Free Your Mind and Think (24 May 2013))

But doing good, according to Francis, is not a matter of faith. On 16 March this year, the new pontiff told journalists he was “inspired to take the 11th-century saint’s name because he was ‘the man of poverty, the man of peace, the man who loves and protects creation,’ the same created world ‘with which we don’t have such a good relationship.'” (Catholic News Service) For Francis, doing good clearly means tackling the world’s problems.

“This commandment for everyone to do good, I think, is a beautiful path towards peace,” Francis explains. The story in Salon calls the pope’s words “a deeper affirmation of his comments back in March, when he declared that the faithful and atheists can be ‘precious allies … to defend the dignity of man, in the building of a peaceful coexistence between peoples and in the careful protection of creation.'” (Salon, 24 May 2013)

Predictably, Pope Francis’ call to “do good” has met with a wide range of responses. One comment on Facebook was quick to remind us that “he still condemns same-sex marriage, last I heard.” Other comments accuse the Roman Catholic Church of “protecting pedophile priests”.

On and on it goes.

Out beyond ideas of wrongdoing and rightdoing there is a field. I’ll meet you there. (Rūmī)

Let the beauty we love be what we do. There are hundreds of ways to kneel and kiss the ground. (Rūmī)

2 thoughts on “Culture of encounter – the foundation of peace”