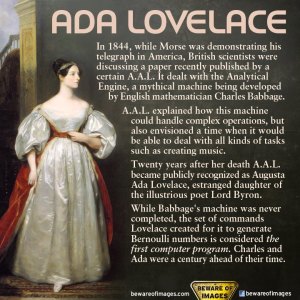 In 1844, while Morse was demonstrating his telegraph in America, British scientists were discussing a paper recently published by a certain A.A.L. It dealt with the Analytical Engine, a mythical machine being developed by Englsih mathematician Charles Babbage. (Click on the image to read more).